The Cornerstone of MHI Craftsmanship, MHI’s Shipbuilding has Continued to Deliver Ships that Respond to the Needs of the Time 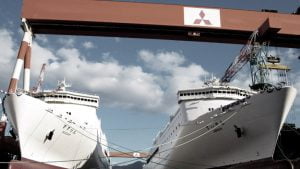 The history of MHI’s shipbuilding history began in 1857, four years after the arrival of Commodore Perry’s Black Ships. Ever since, shipbuilding has remained the cornerstone of the company’s technology and craftsmanship, and more than 5,400 ships have been constructed to date. For over 150 years, MHI’s ships have continuously evolved to meet the changing needs of the times. Between the opening of Japan and the beginning of World War II, ships played an important role connecting Japan to the rest of the world. As the country pressed forward with modernization, demand grew for vessels that could serve overseas routes, such as the TENYO MARU luxury cruise ship (1908 (Note)) and emigrant ships. The subsequent emergence of geopolitical tensions shifted focus towards warships. MHI drew on its shipbuilding technology to build a string of warships, including the majestic MUSASHI battleship (1942). After World War II, MHI’s robust shipbuilding activities contributed to earning the foreign currency that Japan needed for its economic recovery. When the country entered its era of rapid economic growth, MHI supported its leap to economic superpower status by building state-of-the-art ships such as Japan’s first container carrier, the HAKONE MARU (1968), and VLCCs.

MHI’s stance of building ships that respond to the trends of the age remains unchanged today. Global demands for more environmentally responsible and economical products are being met by the OPAL ACE (2011), a car carrier that combines fuel efficiency and environmental advances, the SUZURAN and SUISEN, high-speed ferries fitted with a revolutionary hybrid CRP (contra-rotating propellers) pod propulsion system, and a large LNG carrier equipped with a peapod-shaped tank cover and fuel-efficient turbine plant (scheduled for completion in 2014).  As the only company in the world capable of integrated production of not just ships but also engines, high-performance turbines, and marine machinery, MHI is now presented by the tide of the times with a glorious opportunity to deploy the full range of its technological and manufacturing powers. In addition to enhancing fuel efficiency and pursuing increased environmental friendliness, MHI’s shipbuilding business is shifting its focus towards high-value-added ships for niche markets. This is best exemplified by the development of the HAKUREI, a marine resources research vessel, and the YUMEIRUKA, a deep-sea unmanned exploration vessel. MHI’s shipbuilding business is about to change course towards manufacturing products that deliver ever-more value to society.